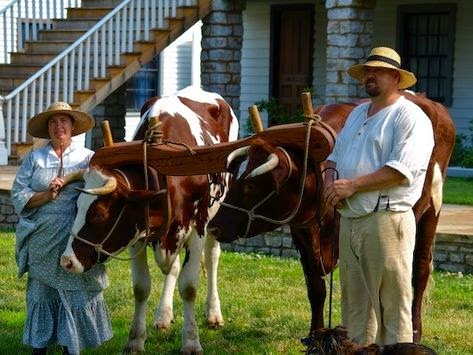 During the Civil War, commanders from both the Union and Confederate armies needed reliable forms of communication to get messages to troops in the field and to relay information to headquarters and government agencies.  They also needed dependable means of transportation to supply troops in the field, to convey sick and wounded soldiers to hospitals for treatment, and to deliver mail and other important messages.

Civil War transportation and communication will be the theme of this year’s Good Ol’ Days celebration at Fort Scott National Historic Site in Fort Scott, KS.  Held on June 7, the event will feature many different transport vehicles, modes of communication and important support functions for each.

To tell the story of transportation, the site will have a stagecoach, a Civil War era ambulance, a freight wagon, a Conestoga wagon, and oxen on site. Oxen were strong and reliable and could pull wagons up steep hills and out of mud holes. Mr. Rick Lunceford, of Oak Grove, MO, will have two of his oxen, Levi and Sampson, at the site for the public to visit with. Mahaffie Farmstead out of Olathe will be bringing a stagecoach, which will be on display on the site’s parade ground.  Civil War officers often road stagecoaches; these vehicles were also used to transport U.S. Mail.  Visitors at this station will be able to write letters on period–looking stationary and then send those letters (using postage stamps which will be for sale at the site).

Additionally, the site will have its ambulance set up next to the hospital building where a surgeon will tell the story of Civil War medicine.  Two different types of wagons used for hauling freight will be on display near the quartermaster storehouse and the site’s stables which was used as the commissary building during the Civil War.  The commissary building held enough food items to comprise one million rations.   The Conestoga wagon next to the stables, while quickly becoming an outmoded form of transportation by the Civil War, was still used for short run hauls by area teamsters.

The site will also have a blacksmith and a saddler on site.  The blacksmith will have a period forge and will be demonstrating what has nearly become a lost art.  The saddler will be discussing his important role in keeping the cavalry “in the saddle”.

Various modes of communication during the Civil War will likewise be highlighted during the event.  Donald Reser and Dick Spain of Topeka, KS will be setting up a telegraph which visitors can use to send messages back and forth to each other. Telegraphs were commonly used to relay information during the war with the first transcontinental telegraph being completed in 1861 and the first telegraph reaching Fort Scott in 1864, one hundred and fifty years ago.

The signal corps will be represented; signal flags were used for passing messages on the battlefield during the Civil War.  One of the site’s volunteers will be portraying a courier, a dispatch rider who delivered packages, mail, and other messages during the war, often between commanders in the field and headquarters. Michelle Martin will be portraying Sarah Edmonds Seelye, a female who masqueraded as a soldier during the war, and also served as a spy for a brief period of time.  Finally there will be a letter writing station, demonstrating the fine art of putting ink to paper in the mid- nineteenth century.

Stations where visitors can learn more about all of these methods of transportation and communication will be open from 10-4.  Additionally, there will be some programs throughout the day addressing these topics. The schedule of activities is as follows.

So come to Fort Scott NHS on June 7 and learn about all these vital forms of communication and transportation. Programs and stations will all be at accessible locations. The site is open from 8-5 daily. There is no entrance fee. For more information, call 620-223-0310 or visit us online at www.nps.gov/fosc.