Voices From The Quilts -

The Reconciliation Quilt of compassion and hope for a renewed post-Civil War America will come to Fort Scott National Historic Site from the International Quilt Study Center and Museum at the University of Nebraska-Lincoln.  The Reconciliation Quilt and eight 19th and 20th century Log Cabin pattern quilts will be on display during select dates and times between March 28 and April 10, 2014.

The International Quilt Study Center and Museum was founded in 1997 when Ardis and Robert James donated their collection of 1000 quilts to the University of Nebraska-Lincoln. Their contribution became the centerpiece of what is now the largest publicly held quilt collection in the world.

In 1867, Lucinda Ward Honstain of Brooklyn, New York, made what has become known as the Reconciliation Quilt. In it she reveals aspects of her individual and social identity during the tumultuous times immediately following the American Civil War. In pictorial form, Lucinda illustrates her roles as wife and mother as well as her personal connections to family, community, and place.

Honstain’s quilt vividly expresses the earnest desires of many for genuine reconciliation between Northern and Southern states in the post-war era. Her quilt contains 40 unique blocks depicting scenes of hope and compassion as the country began to heal. The Reconciliation Quilt being displayed is an identical reproduction created by Hortense Beck of Topeka, Kansas, in 1995. It often travels the country to remind Americans that reconciliation and understanding are timeless ideals that are as relevant today as they were nearly 150 years ago.

The “Voices of the Quilts” exhibit is free and open to the public from 11:00 a.m. until 3:00 p.m. on March 28-30 and April 4-6. The exhibit may be viewed upon request during the week; advance arrangements are suggested and can be made by calling 620-223-0310. The exhibit will be held in the Grand Hall, which is accessible to the mobility impaired.

Posted by Martha at 8:55 AM No comments:

Labels: Voices From The Quilts

The Fort DOES Make A Difference 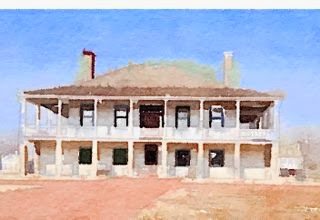 OMAHA, Neb. – A new National Park Service (NPS) report shows that 101,752 visitors to national parks in Kansas spent $4.6 million and supported 64 jobs in the state in 2012.
“The national parks of Kansas attract visitors from across the country and around the world and provide premiere historical, cultural, natural, and recreational experiences,” said NPS Midwest Regional Director Michael T. Reynolds. “This new report shows that national park tourism is a significant driver in the national economy - returning $10 for every $1 invested - and funding generated by national parks has a swift and direct positive impact on local economies in Kansas as well.”
The national parks in Kansas are:  Brown v. Board of Education National Historic Site, Topeka; Fort Larned National Historic Site, Larned; Fort Scott National Historic Site, Fort Scott; Nicodemus National Historic Site, Nicodemus; and Tallgrass Prairie National Preserve, Strong City.
“Fort Scott National Historic Site is proud to welcome visitors from across the country and around the world,” said Superintendent Betty Boyko. “We are delighted to share the story of this place and the experiences it provides and to use the park as a way to introduce our visitors to Fort Scott and all that it offers.   “The fort recorded 25,034 visitors during 2014.  Those people generated an estimated $414,500 for the local economy.”
The peer-reviewed visitor spending analysis was conducted by U.S. Geological Survey economists Catherine Cullinane Thomas and Christopher Huber and Lynne Koontz for the National Park Service.  The report shows $14.7 billion of direct spending by 283 million park visitors in communities within 60 miles of a national park. This spending supported 243,000 jobs nationally, with 201,000 jobs found in these gateway communities, and had a cumulative benefit to the U.S. economy of $26.75 billion.
According to the report most visitor spending supports jobs in restaurants, grocery and convenience stores (39 percent), hotels, motels and B&Bs (27 percent), and other amusement and recreation (20 percent).
To download the report visit http://www.nature.nps.gov/socialscience/economics.cfm.
The report includes information for visitor spending by park and by state.


To learn more about national parks in Kansas and how the National Park Service works with Kansas communities to help preserve local history, conserve the environment, and provide outdoor recreation, go to www.nps.gov/KANSAS.

Posted by Martha at 8:39 AM No comments: