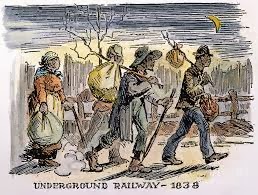 “The Underground Railroad” is part of Shared Stories of the Civil War, a collection of reader’s theater scripts created from historical letters, diaries, newspaper articles, and other archival documents from the 1850s and 1860s. The scripts explore the events – the shared stories – that occurred in Kansas and Missouri during the Border War and American Civil War.

The Underground Railroad was a secretive network of individuals who defied existing laws to aid enslaved people find refuge in non-slave states and Canada. Using the terminology of the railroad, those who guided freedom seekers were called “conductors” and safe havens enroute were known as “stations.” Nowhere in the United States during the late 1850s was the Underground Railroad more dangerous than in western Missouri and eastern Kansas; if caught, the penalties were severe and the retribution swift for both freedom seeker and conductor. While many enslaved African Americans successfully found freedom through their own initiative, those involved with the Underground Railroad let their moral convictions overrule federal law. The Underground Railroad can perhaps be called the first major civil rights movement in the nation.

Because it was so dangerous, records dealing with the Underground Railroad are scarce. Learn more about this heroic epic by hearing some of those first person accounts, then join in the discussion about what freedom means to you.

Shared Stories of the Civil War is a partnership between Freedom’s Frontier National Heritage Area (FFNHA) and the Kansas Humanities Council (KHC). For more information, visit www.freedomsfrontier.org and www.kansashumanities.org

Fort Scott National Historic Site, a unit of the National Park Service, is open daily from 9:00 a.m. until 5:00 p.m. The program is free and the Grand Hall is mobility-impaired accessible.


Fort Scott National Historic Site will be closed Martin Luther King Day, Monday, January 20, 2014.  Visitors may enjoy the fort grounds during daylight hours, but the buildings and visitor center will not be open.
Administered by the National Park Service, Fort Scott National Historic Site commemorates Fort Scott’s role in the opening of the West, Bleeding Kansas, and the Civil War. Normal operating hours are from 9:00 a.m. to 5:00 p.m. There is no charge to enter the park.  For further information call (620) 223-0310 or visit the park website at www.nps.gov/fosc.