Proud to Be An American 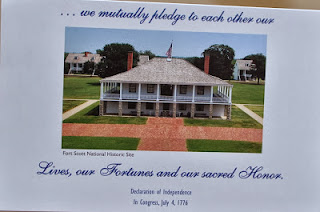 which features a welcome from Fort Scott Mayor Cindy Bartelsmeyer, musical performances from the Fort Scott High School band, orchestra and choir, and an address from the Honorable Mark A. Ward, District Judge of the 6th Judicial District.

Pittsburg State University Army ROTC will present of colors and lead the new citizens in the pledge of allegiance.

Approximately 90 applicants will be naturalized at the ceremony, which is open to the public.  In case of rain or other inclement weather, the ceremony will be held at Fort Scott Memorial Hall.

A luncheon to honor the new citizens follows immediately in the Grand Hall.    The Luncheon is provided by the Friends of Fort Scott National Historic Site and is free to the new citizens and their families. 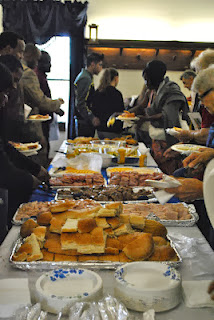 We hope you and your family attend this event where, what we take for granted -- our citizenship, is prized and revered by these, our newest citizens. 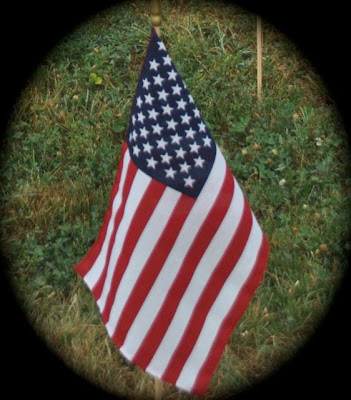 One life lost
in Iraq or Afghanistan 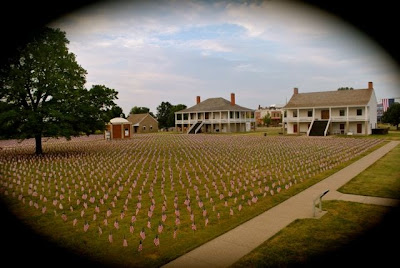 Almost 7,000 flags
on the Parade Ground
of the Fort Scott National Historic Site 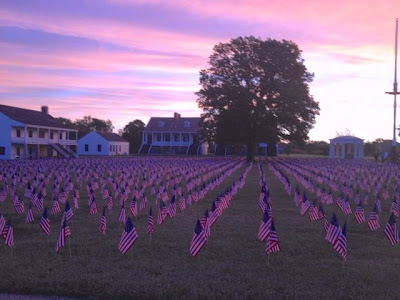 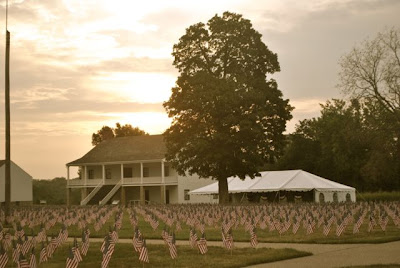 So proudly they wave 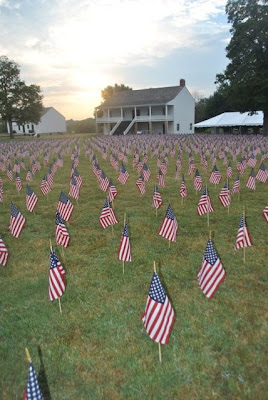 A Field of Honor 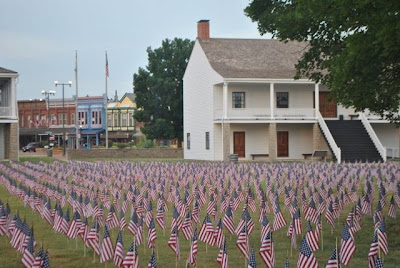 To Honor The Fallen 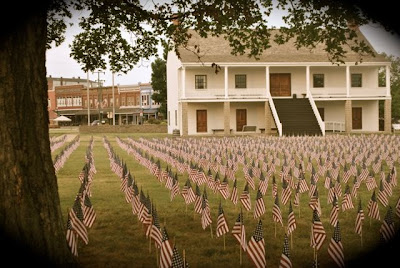 Of the 21st Century 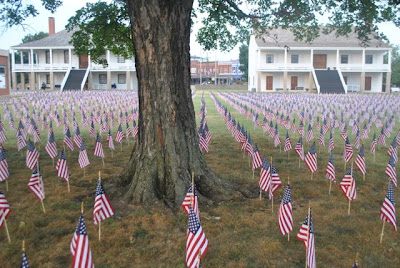 On the grounds of an 18th Century Fort 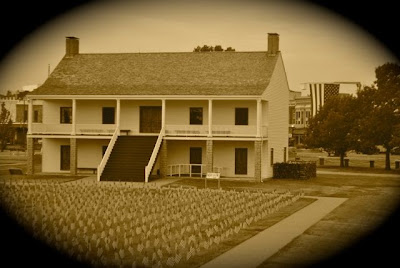 The Field of Honor 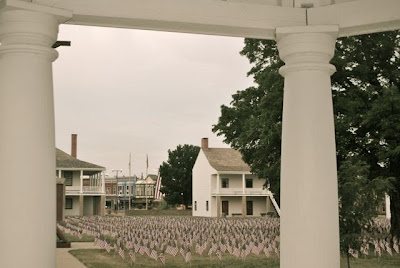 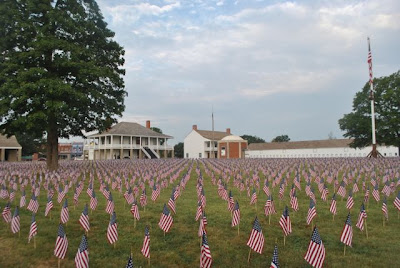 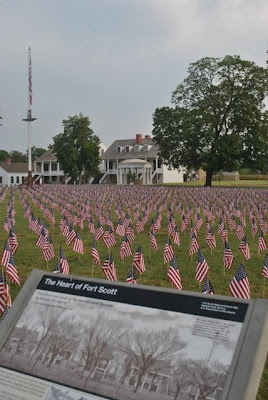 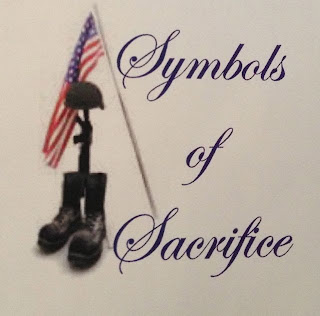 Fort Scott National Historic Site
(FSNHS)
is pleased to partner with the
Friends of FSNHS and
community members to present
Symbols of Sacrifice
a free series
of programs that highlight the
sacrifice of Americans throughout much of the
19th, 20th, and 21st centures.

The main focus of the event will be a
Field of Honor on the historic
FSNHS Parada Ground,
where a US flag will fly for each service member
who has died while serving in
theater supporting US military operations
during the War on Terrorism

The purpose is to remember the fallen,
their sacrifice and their humanity,
not to glorify war.

JOIN US FOR THESE EVENTS:

On Wednesday, September 11, FSNHS will host a memorial service beginning at 12:00 noon to remember the victims of the 9/11 attachs.    The ceremony should conclude by 12:45 pm following the playing of Taps.    The public is invited to remember that day of uncertainty where average Americans exhibited selfless, uncommon valor, then walk the Field of Honor.

On Saturday, September 14, Symbols of Sacrifice programming begins at 10:00 a.m.    Students from Fort Scott High School will provide prelude music beginning at 11:30 am.

At noon, the Colors will be presented, followed by brief remarks of welcome and remembrance by members of government, veterans and the American Gold Star Mothers.

Taps will conclude the remembrance ceremony and visitors will again be invited to walk the Field of Honor.

Programming continues at 1 p.m. with a presentation by the American Gold Star Mothers and concludes with a stirring rendition of the Gettysburg Address and the Battle Hymn of the Republic.

Posted by Martha at 3:29 PM No comments:

“Everyone is carrying a gun” said one observer of the town of Fort Scott during the late 1850s.  During that era, known as Bleeding Kansas, people who held widely varied beliefs descended on Fort Scott.  From abolitionists to proslavery advocates, from Jayhawkers to Border Ruffians, each had their own point of view on what was right and wrong and their own concept of justice.  Those concepts often clashed violently at Fort Scott in the 1850s.

An evening tour at Fort Scott National Historic Site will take a look at many of the people who came to Fort Scott during that era.  Six different scenes will represent the buildings and people who brought about conflict in the 1850s. Conflict could be found in the courtroom, the land office, the sheriff’s office - there were even two competing hotels. From the attempted burning of one of these hotels to the tragic shooting of one of its leading citizens, Fort Scott was no stranger to violence and intrigue during this era.

The tour will be offered on August 17 at 6:30 p.m. at the historic site. There is no charge for this tour which is the third in a series of evening tours this summer.  It will meet at the visitor center.

Posted by Martha at 5:10 AM No comments:

Quantrill's Raid and Order No. 11

Saturday, the Fort Scott National Historic Site
shared those stories
And the attendees had lively questions for the moderator. 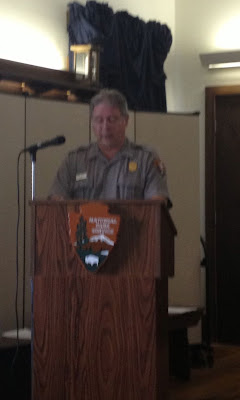 A panel of readers
shared those stories
One by one,
we watched the stories unfold. 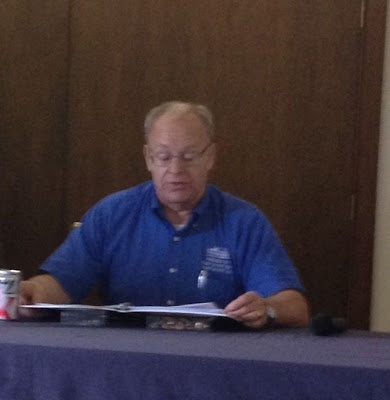 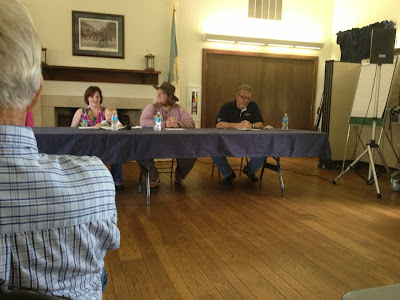 Katie Wells, Matt Wells and Jim Scott were part of the panel 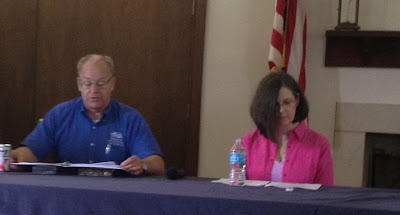 Reed Hartford and Cynthia McFarlin rounded out the panel.

Because the raid was not that far away in Lawrence, Kansas
And because Order No. 11 involved Vernon County (20 miles to the East)
there are stories of grandparents and great-grandparents
that were passed down.
And those were shared by the audience as well.

That is real living history. 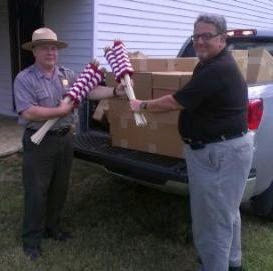 Each flag will represent each of our lost military heroes since 9/11.   The flags will be on display the week of 9/11 with ceremonies honoring those fallen.
Posted by Martha at 1:50 PM No comments:

Kansas was the first Union state to recruit, train, muster and send African American soldiers into combat.
The 1st Kansas Colored Infantry was the first African American regiment to be recruited from a norther state and the first to defeat the Confederates in combat.
January 14, 2013 will be the 150th Anniversary of the federal muster of this unit which was sworn into service on the parade grounds in Fort Scott.

In commemoration, Fort Scott National Historic Site will offer a special program on Saturday, January 12, 2013, at 2 p.m. in the site's library.
Retired National Park Service Historian, Arnold Schofield, will offer the keynote address about the formation of the 1st Kansas Colored Infantry.
The program will also honor the African American officer with the unit, Captain William D. Matthews, with a dramatic reading of his life's story.
Period music will be performed by volunteer Matthew Wells.
Additionally Park Ranger, Barry Geersteen will give a talk about the Emancipation Proclamation, which became official on January 1, 1863, and paved the way for the mustering in of the unit 12 days later.
The program will last approximately one hour and is open to the public.
There is no fee for the program or for visitation to the site which is open daily from 9 a.m. to 5 p.m.

One item of note is that it was the story of the 1st Kansas that convinced Congress to authorize funding for the site in 1965., the same year that civil rights legislation was passed.
This story will also be briefly addressed during the program.
This program is one of many planned to commemorate the Civil War sesquicentennial.
For more information, call 620-223-0310