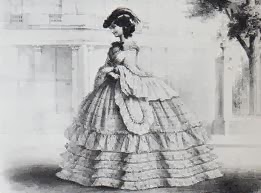 Women at War Program to be Held at Fort Scott NHS

Most military histories detail the exploits, heroism, and sacrifice of male officers and soldiers, but equally as important in wartime are the roles of women.  While they have not traditionally served in combat roles, women throughout history have served in a variety of functions during war to support the efforts of soldiers. They have kept the home front going, provided aid and comfort, followed the army into war, served as nurses, and in modern times become an integral part of the armed forces.  For many women, war has been as much of a challenge to them as it has been to their male counterparts.

On Saturday, February 8, 2014, a program featuring women and war will be presented at Fort Scott National Historic Site.  The program will be offered in two parts.  During the first part of the program, Fort Scott volunteers will tell the stories of women during the Mexican-American and Civil Wars.  The second part of the program will feature the Fort Scott Community College’s theater department performing segments of Women and War, a  play that brings to light the varying roles that women have played in all of America’s 20th Century wars.

During the first part of the program, Fort Scott volunteer Katie Wells will portray Susan Shelby Magoffin, a young newlywed who accompanied her husband down the Santa Fe Trail and into Mexico during the Mexican War.   Wells will be sharing several of Magoffin’s journal entries that show her reaction to war.  Susan Anderson will then play the role of Emma Morley, who came to Fort Scott during the Civil War, where she became a nurse in the hospital.  Morley experienced the fear of the border war and also witnessed the suffering of soldiers after the Battle of Mine Creek.  The concluding presenter for the first part of the program will be Michelle Martin. Martin tells the story of Sarah Edmonds Seelye, a woman who disguised herself as a soldier, served as a Union spy behind Confederate lines, and later worked as a nurse.  Seelye moved to Fort Scott after the war.

Following a short intermission, students from the FSCC’s theater department will tell stories of women and war in a reader’s theater format. Based on historical facts, this play is presented through a collection of stories told in letters and monologues by generations of Americans impacted by conflicts, from The Great War (World War I) to the war in Afghanistan. Deeply touching and educational, this play is an emotional roller coaster. These accounts are moving, funny, exiting, humbling and incredibly sad all at the same time.

The program will begin at 2:00 p.m. and last for approximately two hours.   It will be held in the Grand Hall, located on the top floor of an infantry barracks building at Fort Scott NHS.  Admission to the program and the site is free of charge.